A client asked us a few days ago for our thoughts on Aereo, the internet TV start-up that delivers “broadcast” TV to Apple iPads, iPhones, iPod Touches, and—used with one of those devices and an Apple TV or Roku set-top box—regular televisions.

Aereo also offers a network-based DVR, so users can record the shows they want to see and watch them anytime they like.  And, because Aereo uses an iDevice as the primary user interface, users can search for content by typing on the on-screen keyboard.  The service costs $12 per month after a three-month free trial.  (Aereo is only available in New York City for now, so you may have to wait to try it.)

The request for a comment on Aereo is a good opportunity to highlight what we think is happening with the internet TV more broadly.

These companies all have four major things in common:

So, what we have is a video service universe in which conventional pay TV operators offer a lot of high-quality content using older user interfaces, while upstarts offer more modern user experiences but have less content: 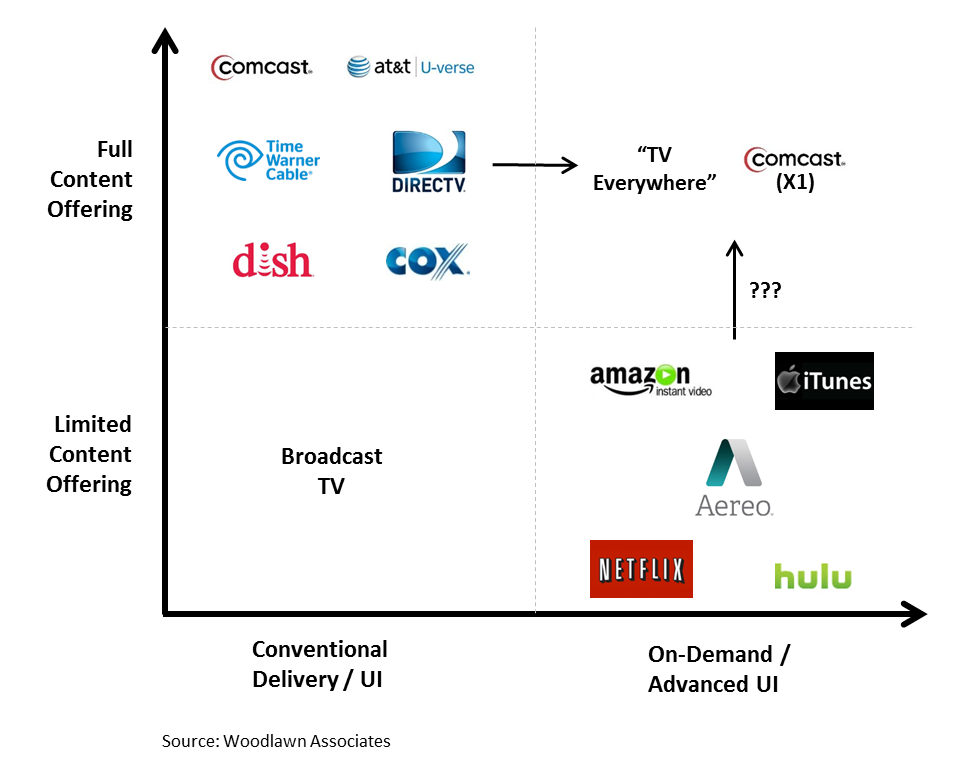 The Holy Grail of TV

For me, the holy grail of internet TV would be a product and service that (a) offers the full lineup of content I can get from cable, satellite, or telco TV, (b) includes really easy ways to search for and watch content on whichever screen is most convenient for me at any given time, and (c) is free.  I don’t think this is much different from what most consumers want.

Sadly, “free” is completely inconsistent with “the full line up of content.”  At least in that regard, I’m resigned to the fact that you get what you pay for.  Still, I suspect a good measure of the resistance to paying conventional TV operators is less about dissatisfaction with the content and more about dissatisfaction with the user experience.

Innovation in Internet TV, but is it Disruptive Innovation?

The innovation from internet TV providers has improved the TV experience.  It is a pleasure browsing for a movie on an Apple TV and a pain on Comcast’s On-Demand service.  When I’m not sure which channel a show is on, it is a cinch to find it using the keyboard of my Logitech Google TV system.  It’s hard on cable.

A fundamental question for the TV industry, however, is whether any of these upstart providers can provide an experience that is a better value than conventional pay TV service for some customers.

The classic model of a disruptive innovation is a product that, while not as good on the conventional dimensions of competition as incumbent products, is better on others.  This peels off some subset of the original customer group.  Then, once the upstart gets momentum, it gradually adds capabilities that appeal to a larger share of the market.

I don’t think any of the upstarts yet qualify as disruptive innovations, because for the most part consumers have been unwilling to substitute them for conventional pay TV.  In fact, the number of pay TV households in North America has continued to grow.

However, the danger to and opportunity for conventional operators is clear.  If an internet TV service does put together a mix of content and UI that is “good enough” to be a substitute instead of a supplement, it could be a major threat.  In any event, why should operators let upstarts siphon off $10 per month for supplementary video when they could capture it themselves?

Pay TV operators have started to respond, albeit painfully slowly from a consumer perspective.  They have rolled out smartphone apps that allow users to search for content, schedule DVR recordings, and change the channel on their TVs.  They have also started to offer access to TV content on non-TV devices through “TV Everywhere” initiatives, although progress has been somewhat uneven due to the complicated negotiations for content rights.

However, for the vast majority of pay TV subscribers, the user experience is still stuck in 1985, opening a window of opportunity for competitors.  Comcast is just starting to roll out its new X1 user experience in its first city.  Given how heterogeneous cable networks are and the huge installed based of legacy hardware, it will be several years before operators have fundamentally upgraded the user experience for a majority of their users.

Ultimately, there are five major challenges internet TV upstarts have to overcome during this of this window of opportunity:

Can they make the user experience intuitive and fast across multiple device types?  Can they secure the content to the satisfaction of content owners?  Can the internet delivery HD-quality video reliably enough that people are happy to pay for it?  What happens when a household wants to watch more than one video at the same time?

What mix of content will be appealing to consumers looking to (a) supplement their pay TV service or (b) substitute for it?  How does the company get access to the content?  How much will the company have to pay for the rights to this content?  Because they are small to start with, upstarts’ negotiating power with content owners is limited.  They will pay more for the same rights than big pay TV operators like Comcast and DirecTV.

Will video consumers ultimately want a subscription or à la carte model?  What is the right price?

Will conventional pay TV operators improve their service enough to prevent users from adopting new services, either as substitutes or supplements?

Why so Little Activity in the Upper Right?

Why are there no internet TV providers offering a full lineup of video content (on the upper right of my graphic)?

First, potential providers may be concerned the internet is not able to deliver video reliably enough.  As we suggested in our earlier post about an Apple television, it would be a problem if you asked people to spend $5000 on TVs plus $60 per month for service and then couldn’t deliver more than one video stream at a time.  However, if someone were to offer a similar service for tablets and computers, I think people’s expectations would be different than if the same service were offered for televisions.  (Naturally, some people would connect their computers to their televisions, but people willing to operate on the bleeding edge would tolerate the limitations.)  Given the additional flexibility and improved UI, I bet a lot of millennials would choose to purchase such a service for their iPad rather than buy a TV and satellite service.

Second, upstarts probably would have to pay more for the same content than large conventional operators.  If DirecTV pays $35 per month per subscriber for the content it distributes, perhaps an upstart would have to pay $40-45.  However, given that the start-up does not have to operate a physical network or pay for subscriber premises equipment, it would seem that it could still price such a service to be no more expensive that conventional TV service.

Finally, it could be that it is difficult to negotiate the content rights for such a service.  I suspect this is the real reason we don’t yet have a service like I’ve described.  Look at how difficult it has been for the conventional operators to negotiate rights for their TV Everywhere services.  And, given the amount of money conventional operators pay content owners each year, it is natural for content owners to prioritize negotiations with those parties more highly than with upstarts.

Notwithstanding this last point, however, if I were an upstart internet TV provider, I’d spend a lot of energy trying to negotiate such a content agreement.  I would make the case that I could capture latent demand—particularly from millennials who aren’t subscribing to any conventional video service today.

So, what did we tell our client about Aereo?

We said it seems to be yet another niche product for a rebellious cord cutter, but hardly a major threat to pay TV in its current form.  By itself, Aereo only offers a small subset of the content offered on pay TV platforms.

Used in conjunction with several other services (perhaps iTunes and MLB.tv), a user could theoretically get most (but not all) of the content available on pay TV.  However, he would have to deal with multiple different user interfaces, not to mention fees that could quickly approach what he would pay for cable or satellite TV!  You are not likely to disconnect Grandpa’s DirecTV, buy him a Roku and a iPod, and sign him up for Aereo.