This post was updated on February 9, 2017. The original version was published in March 2013.

The three main pillars of competitiveness in the solar industry are the ability to acquire customers at low cost, install inexpensively, and achieve low cost of capital.  To realize a low cost of capital, solar developers must often partner with so-called “tax equity” investors due to the structure of federal solar incentives.  This paper summarizes the main financial arrangements used for such financing: sale-leasebacks, partnership flips, and inverted leases (which are also called lease pass-throughs).

The examples in the paper are from solar, but many of the same principles apply to the wind industry as well.

There are three federal incentives for businesses that invest in solar systems:

These benefits have value because they reduce the amount of taxes a business would otherwise pay.  For example, suppose a business would owe the government $1 million in income taxes in the absence of any solar investment, but it now invests $600,000 in solar systems.  It takes a tax credit—that is, a direct reduction of its taxes—of $180,000.  It also claims bonus depreciation of $255,000 and accelerated MACRs depreciation of $51,000 in the first year.[1]  If its tax rate is 35%, this reduces its tax burden by another $107,000.  The business has reduced its taxes in the first year by $287,000, or nearly half of its solar investment.  This reduction in the taxes the business would otherwise owe is effectively the federal government’s subsidy of solar.

Of course, in order to take direct advantage of these incentives a business must have a tax liability to begin with.  Many solar dealers and developers do not have sufficient such liabilities; to use the incentives they partner with tax equity investors as described below.

The American Recovery and Reinvestment Act of 2009 allowed companies to take a cash grant of 30% of their basis in a solar system from the U.S. Treasury in lieu of the ITC.  These grants are often referred to as “Section 1603” grants after the section of the law that created them.  They expired at the end of 2011.

One critical consideration in determining the value of the ITC and depreciation benefits is how much one can claim as the basis against which one is claiming the benefits—the larger the basis, the larger the tax benefit.   A company’s basis is generally the amount of its investment in the property.  When a project is sold by a dealer or developer to an unrelated third party, the new owner’s basis is clear—it is what it paid for the system.

However, when there is no sale between independent parties—as is the case when a developer contributes or sells the system to a joint venture that it owns a part of—the Treasury and IRS rely on the concept of Fair Market Value (“FMV”).  They define FMV as “the price at which property would change hands between a buyer and a seller, neither having to buy or sell, and both having reasonable knowledge of all necessary facts.”

The government will accept FMV calculated in any of three approaches: cost, market, or income.[2]  The cost approach may include the cost of equipment, engineering, permitting, and installation.  It may also include overhead related to the above.  It may also include a reasonable profit, which Treasury defines as 10-20 percent, and a developer fee of 3-20 percent.  (The developer fee should not be considered as covering developer costs that are not eligible to be included in basis, such as marketing or the cost of arranging financing, but rather as compensation for the capital put at risk before it knew there was going to be a sale.)

The market approach is based on the sale of comparable properties.  In other words, the price that similar systems in similar locations have sold for between unrelated parties.

Finally, the income approach uses the discounted value of future cash flows of the project.  Treasury is least comfortable with this approach because it relies on assumptions that are difficult to verify or that require a lot of judgment.  For example:  the appropriate discount rate (we have seen developers use everything from 6-10%), the terminal value of the systems, and future rates of inflation and taxes.  Although Treasury is uncomfortable with the income method, we understand the IRS uses this approach internally.

FMV is a critical issue because (presumably) everyone wants to comply with the law but everyone also has an incentive to claim the highest FMV possible.  This is not to be taken lightly:  the Departments of Treasury and Justice have issued subpoenas to a number of companies in the industry investigating the possible misrepresentation of FMV for 1603 grants.  However, companies that are conservative will receive fewer tax benefits than those that are more aggressive but still follow the law.

[2] A Treasury summary of these three approaches is available at http://www.treasury.gov/initiatives/recovery/Documents/N%20Evaluating_Cost_Basis_for_Solar_PV_Properties%20final.pdf.

In addition, most tax equity investors will only join in funds intended to finance at least $75-100 million within one year, which is more capital than most developers can deploy.

The sale-leaseback is the most straightforward of the structures (see Figure 1):

Sale-leasebacks have the following advantages and disadvantages for developers:

In partnership flips, the developer (also referred to as “the sponsor” because it sponsors and manages the project) and tax equity investor form a joint venture partnership and the allocation of profits, cash, and tax benefits “flips” between the parties one or more times during the life of the partnership.  These flips allow the sponsor to invest alongside Tax Equity so it retains a residual interest in the systems after their installations, and they allow the transfer of most (typically 99%) of the tax benefits to the tax equity investor.  They also allow the sponsor to regain 100% ownership of the assets at reasonable cost after all the tax benefits have been used by the tax investor.

The partnerships are organized as limited liability companies so there are no income taxes at the partnership level; taxes are paid by the investors on their own corporate tax returns.  The vast majority (usually, but not always, 99%) of the profits, losses, and investment tax credits from the partnership flow to the Tax Equity for the first several years, after which these attributes “flip” and the sponsor gets the majority of them (usually, but not always, 95%).

The flip is designed to happen as early as the end of year five or as late as year nine, and is supposed to coincide with a time when Tax Equity will have received a certain target rate of return, net of all tax benefits and cash it is distributed.  The flip cannot happen before the end of year five or the government will recapture a portion of the ITC.

One important concept to understand when dealing with partnership flips is that the cash generated by the partnership can be distributed to the partners in a completely different ratio than the tax profit or loss.  For example, while the tax equity investor may get 99% of the tax profit or loss before the flip—and it is usually a loss, which is what reduces its net corporate tax payments—it usually gets a minority of the cash generated from lease payments and other sources.  Most of the cash goes to the sponsor.

The sponsor usually has the right to purchase Tax Equity’s position after the flip.  The buyout price is usually the greater of fair market value at the time of the buyout or the amount that would give the tax equity investor its required rate of return.  In any event, because after the flip Tax Equity only gets a small minority of cash distributions, the buyout price is quite reasonable (compared with the price in a sale-leaseback). 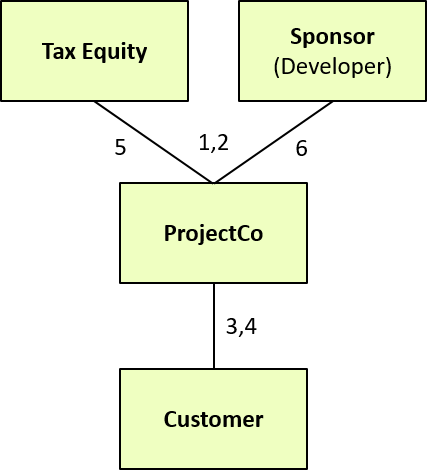 Partnership flips have their own set of advantages and disadvantages:

There are two major sub-types of the partnership flip.  The so-called yield-based flip is the most popular.  Tax Equity gets the vast majority of the tax benefits plus enough cash to get its required after-tax IRR at an expected target flip date.  If the assets underperform, the flip is delayed until Tax Equity gets its agreed return.

Some banks, including especially U.S. Bank, do flips in a slightly different way.  In this “fixed flip” model, Tax Equity gets a fixed preferred return of about 2-3% of their investment up to the flip in addition to the tax benefits.  The flip happens at the end of year 5 or 6 irrespective of whether Tax Equity received its target return.  (The 2-3% preferred return plus the tax benefits will yield the target return with high probability.)  Fixed flips make sense if tax rates are stable; we expect they will become less popular going forward, given all the talk in Washington about possible changes to tax rates.

It is possible for ProjectCo to use debt.  This is not shown in the Figure 2 for simplicity.  Using debt at the project level is rare.

For more information on partnership flips, see our more detailed article on their mechanics and accounting, Tax Equity 201: Partnership Flips. 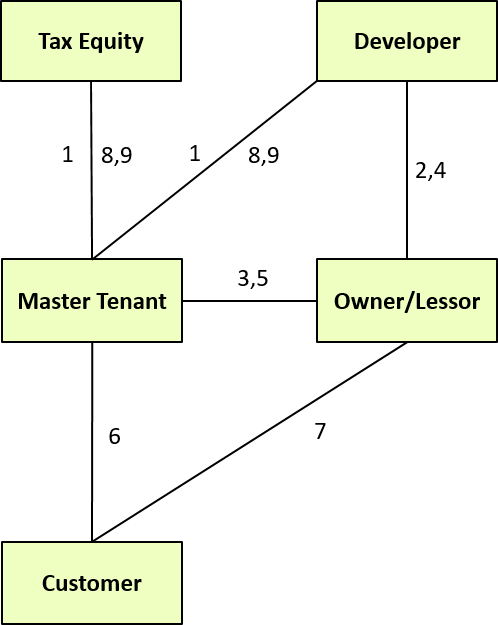 The advantages and disadvantages of inverted leases include:

Woodlawn has developed Microsoft Excel models for each structure; they are available at our web store.

Woodlawn would also be happy to answer any questions you might have about tax equity structuring and investments. Please feel free to contact us.