Should legislation reach President Trump’s desk, the consequences for infrastructure investors will be significant.  What do we know so far?

This is the first issue of a new Woodlawn series about infrastructure investment, combining our expertise in tax equity, federal policy, and energy infrastructure.

We will be providing regular updates on the various infrastructure investment proposals under consideration in Washington, DC, focusing on how they would work, where they stand in Congress and the Trump Administration, and what they would mean for private investors.

The parties agree on need for infrastructure investment, but not on how to finance it

Infrastructure is one of the few policy areas in which Democrats and Republicans are mostly in agreement.  Both Donald Trump and Hillary Clinton proposed major infrastructure investments during their respective campaigns.  Leaders on Capitol Hill, on both sides of the aisle, have spoken out in favor of rebuilding American infrastructure.

However, while Democrats and Republicans might be aligned on the end goal, they are not aligned on the means.  Republicans, including President Trump, mostly prefer to finance any investment in infrastructure through public-private partnerships.  Democrats, on the other hand—led by Minority Leader Chuck Schumer—have proposed an alternative $1 trillion infrastructure package financed entirely through direct expenditures.

President Trump’s plan provides a tax incentive to make infrastructure public-private partnerships more attractive to private investors.  Specifically, he proposes an 82 percent tax credit on the project’s equity investment.  Wilbur Ross, the nominee for Commerce Secretary, and Peter Navarro, head of the National Trade Council, are the authors of President Trump’s plan and suggest that a typical project will be financed with a 5:1 ratio of debt to equity.  Thus, the tax credit is, in effect, equal to 14 percent of the project’s cost.

To illustrate how this works, consider a $1 billion infrastructure project undertaken by a partnership between the City of Chicago and private investors.  Assuming the project is financed with a 5:1 debt to equity ratio, as the Trump Plan does, the project would require $833 million in debt financing and $167 million in equity financing.  Equity would receive a $137 million federal tax credit (82 percent of $167 million).  $137 million is approximately 14 percent of $1 billion, the project’s cost.

Presumably, the enacting legislation for the Trump Plan will set priorities and, perhaps, limitations on the types of infrastructure that would qualify for the tax credit.  With the caveats that (1) the Trump Administration’s view on this subject is rapidly evolving, and (2) the available information is scant, we have compiled data from three official information sources: the Ross-Navarro white paper, the Trump for President website, and President Trump’s inaugural address.  They suggest that the Trump Administration will focus on transportation infrastructure; airports, bridges and tunnels, rail, and roads were mentioned in all three sources.

Additionally, a leaked document obtained by the Kansas City Star describes 50 infrastructure projects under consideration by the Trump Administration and provides further clarity as to which types of projects might be prioritized in eventual legislation.  This document, which is unofficial and was prepared by a Washington-based trade group working with the Trump Administration and the National Governors Association, suggests—somewhat surprisingly—a particular emphasis on rail infrastructure.  It also includes several projects to generate or facilitate transmission of renewable energy.  See the breakdown of projects in Figure 1. 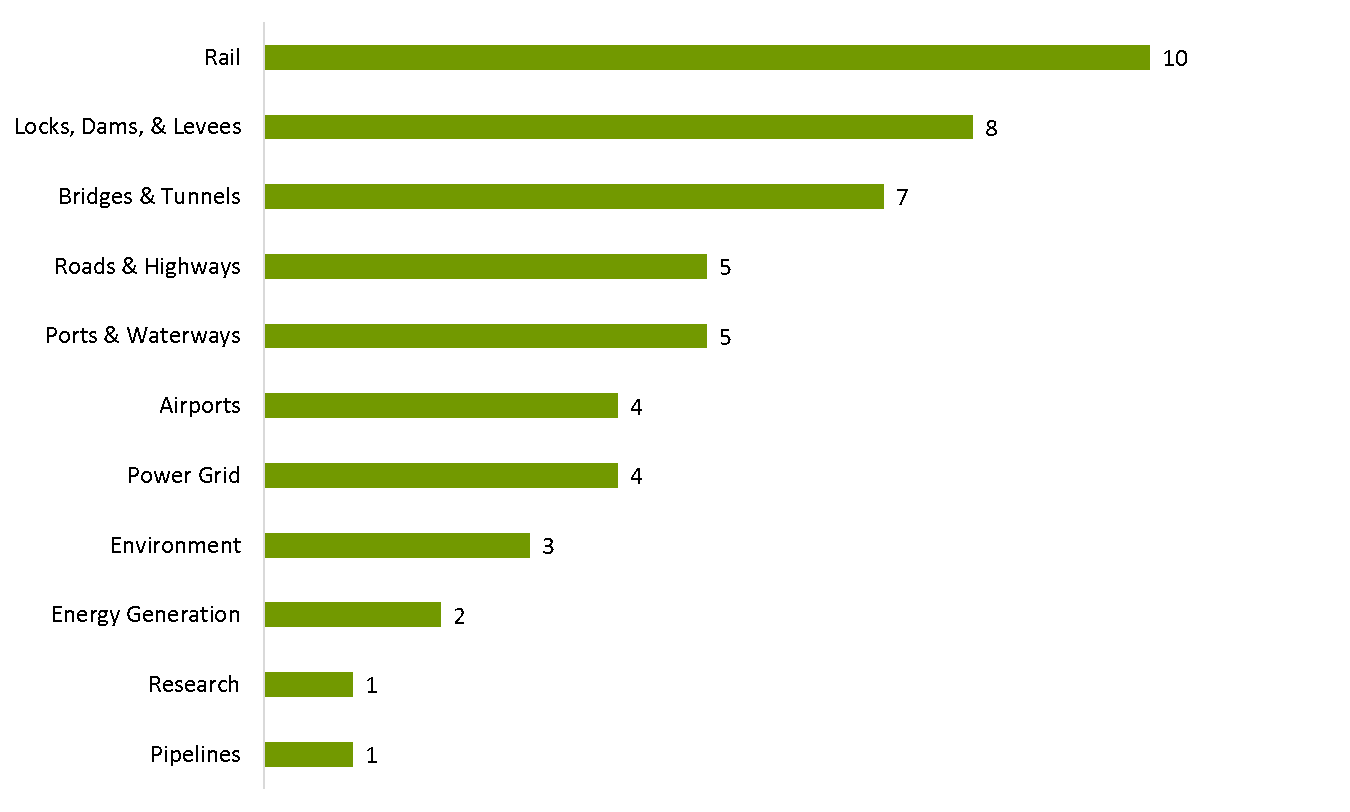 Legislative action not imminent:  Trump Plan may have to wait on other legislative priorities

While bipartisan support for infrastructure investment suggests some degree of optimism is warranted, the way forward is not at all clear.  We have had a number of conversations with senior House and Senate staff, and while most staffers expressed eagerness to move forward with an infrastructure package, none reported any knowledge of legislation to do so or a specific timeline for legislative action.  At this point, most of the oxygen on Capitol Hill is being sucked up by the discussion around cabinet confirmations and Obamacare.

Even once Congress moves beyond the cabinet and Obamacare discussions, substantial challenges remain.  To move forward on an infrastructure plan, Republicans will need Democratic support in order to avoid a filibuster.  But Democrats have started to go on record opposing infrastructure tax credits as the only mechanism for financing infrastructure investment.  Generally, Democrats prefer direct expenditures.

Second, even if some Democrats were to agree to the details of the Trump Plan, President Trump would still have to win over those hold-out Republicans who are opposed to any increase in government’s fiscal obligations, including via tax credits.  To do this, President Trump and his advisers have floated using the tax revenue from a foreign earnings repatriation to offset the cost of the infrastructure plan.  But Republicans have long planned to use that revenue to facilitate tax reform.  Expect to see a tug-of-war between President Trump and Speaker Ryan over how the repatriation revenue gets spent.

A February 1 hearing in the House Committee on Transportation and Infrastructure underscored the uncertainty of this whole process.  Both Chairman Bill Shuster (R) and Ranking Member Peter DeFazio (D) made statements in general support of infrastructure investment, but there was no substantive discussion or line of questioning aimed at President Trump’s financing proposal in particular.

Today, the Investment Tax Credit (ITC) provides a tax credit equal to 30% of the value of solar projects and the Production Tax Credit (PTC) provides a tax credit of $0.0184 per kWh of energy generated for wind projects.  But, many solar and wind project developers do not have enough tax liability to use these benefits themselves.  As a result, they often seek tax equity investors—investors who can use the tax benefits—as partners (see our primer on tax equity here).  Structuring these investments to meet all the requirements of the Internal Revenue Code, however, is exceedingly complex and the number of tax equity investors has been small.

An infrastructure tax credit would also be challenging to monetize

Monetizing an infrastructure tax credit will be no less difficult, and perhaps more so.  First, consider that many infrastructure projects have extremely large dollar values.  A $1 billion project, for example, would potentially generate a $140 million tax credit. To use that credit directly, a project investor would need to have very large profits from other businesses.  Moreover, most leading private infrastructure funds are organized as pass-through entities and count tax-exempt pension funds and endowments as major investors.  These investors can’t efficiently use such a tax credit, either.  To confirm this, we have had conversations with several leading infrastructure private equity firms and none of them have indicated that they have sufficient tax appetites to monetize all or most of the potential tax credit.

In short, it is likely that many infrastructure investors will need to secure a tax equity partner to use the credits described in the Trump Plan. However, it is not clear that there is enough tax equity capacity in the market to meet this need.  The market for tax equity in the renewable energy sector is supply-constrained.

To take advantage of the opportunities in infrastructure in the next few years, infrastructure investors and developers, tax equity providers, state and local governments, and policymakers should be developing answers to a few key questions.

Send us your feedback

We hope you’ve found this first issue of the Woodlawn Infrastructure Update helpful.  Please send us your questions and suggestions for future topics.

Remember to click here to make sure you continue to receive the Woodlawn Infrastructure Update.  Look for the second issue in a few weeks.