New York’s efforts, known as Reforming the Energy Vision, call for utilities to become “distributed system platforms.” In this role, utilities would both manage and participate in markets for distributed generation, storage, energy efficiency, and demand response.

Today, New York utilities are allowed a regulated rate of return based on assets. However, New York Public Service Commission chair Audrey Zibelman has emphasized several times she would like to see an incentive-based approach that rewards efficiency, not assets. We applaud the move towards more incentives. Per Tirole, the PSC could take the opportunity to develop the menu of regulatory options that provide the right balance between providing incentives and avoiding the ratchet effect—that is, between incentives and cost-based regulation.

Another area the PSC has focused on is mitigating the market power of distribution utilities. For example, it suggests limiting utility investments in distributed energy resources to energy efficiency programs, utility-sited storage and generation, and other investments approved on a case-by-case basis. An incentive based on the output of competitors, such as third parties offering storage or generation, would also seem to be worth examining. For example, the PSC could give a price incentive to utilities that achieve certain load shape goals using third-party resources.

Finally, we encourage the PSC to think carefully about market design if it wants to create a true platform market. First, at least one set of participants needs to benefit from the number of other participants.  Perhaps community solar developers and their consumers, who can transact through the grid platform, can fill this role. Second, the PSC should ensure the distribution of prices charged by the platform (utility) encourage maximum participation. Even if the final design fails one of these tests, however, it may be sufficient to create a mechanism by which third parties compete to offer services the utility needs to buy to optimize load shape and network stability.

Hawaii: Inclinations on the Future of Hawaii’s Electric Utilities

Hawaii has the highest penetration of distributed generation in the country. This has had a significant impact on both distribution circuits and the amount of utility-scale generation required. In Figure 1, below, see how peak system load on Oahu has decreased from about 1,200 MW to 1,050 MW in six years. Note also the shorter duration of peak demand than was the case historically. 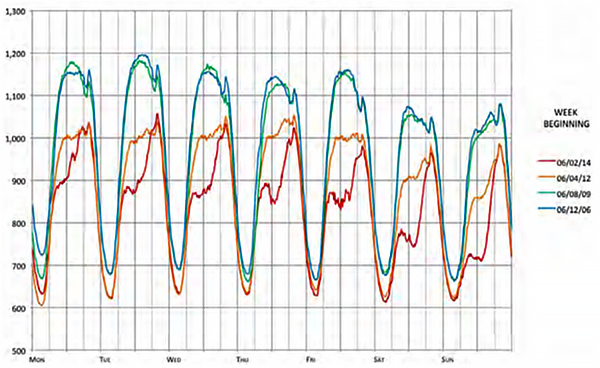 This puts The Hawaiian Electric Companies (“HECO”) in a bit of a pickle because they have to deal not only with the impacts of distributed PV on the distribution network, like New York, but also manage the financial impacts of decreased utilization of their generating plants. HECO generates a larger share of the energy it distributes than utilities in other states with high penetration of DG, such as New York and California:

Figure 2: Percent of energy distributed that is self-Generated, Selected Utilities

In April the Hawaii Public Utilities Commission issued a regulatory order and white paper called Commission’s Inclinations on the Future of Hawaii’s Electric Utilities that instructed HECO to put together plans to develop a 21st century generation system, create a modern transmission and distribution grid infrastructure, and assist in policy and regulatory reforms. As it evaluates HECO’s responses, the PUC might consider some policy and regulatory reforms of its own that would be consistent with Tirole’s research:

First, the PUC ought to consider mixing Hawaii’s traditional rate-of-return regulation model with one that includes an incentive for the amount of DG connected. HECO’s response to the PUC order spends a significant amount of time explaining all the technical complexities and costs associated with accommodating DG―exactly what Tirole suggests will happen when monopoly firms are asked to provide network access that enables competition. An appropriately designed incentive for DG connections would balance HECO’s understandable desire to limit competition or increase its asset base with an equally powerful incentive to enable DG.

The Hawaii PUC should also offer HECO a menu of regulatory options. Some options would be largely rate-of-return and others would have more fixed-price elements. If HECO has few real prospects of reducing cost it will choose to continue with rate-of-return regulation. On the other hand, if the boom in distributed solar actually allows long-term cost reductions it will choose an option that includes some fixed price components that allow it to capture some of the potential savings as increased earnings. Designed appropriately, Hawaii ratepayers could also share in the benefits.

As we’ve seen, Jean Tirole’s work has significant and useful implications for the regulation of electric utilities. This is not to say that application of these principles is simple. For example, developing an actual menu of regulatory options requires a deep understanding of the particular local conditions and significant analysis. We hope this brief introduction, however, helps regulators and utilities develop more efficient solutions.

Woodlawn Associates is a management consulting firm with extensive experience in energy and distributed solar. We have advised some of the largest utilities in the United States on strategy for integrating or dealing with DG. If you would like to discuss any of these ideas at more length, we would love to hear from you.