Large utilities seem to be increasingly interested in distributed solar as a business.  Consider the news from the past 60 days:

These aren’t the only such companies looking into the business.

Here’s an overview of significant, publicly announced activities in distributed solar by the 20 most valuable utilities and power companies: 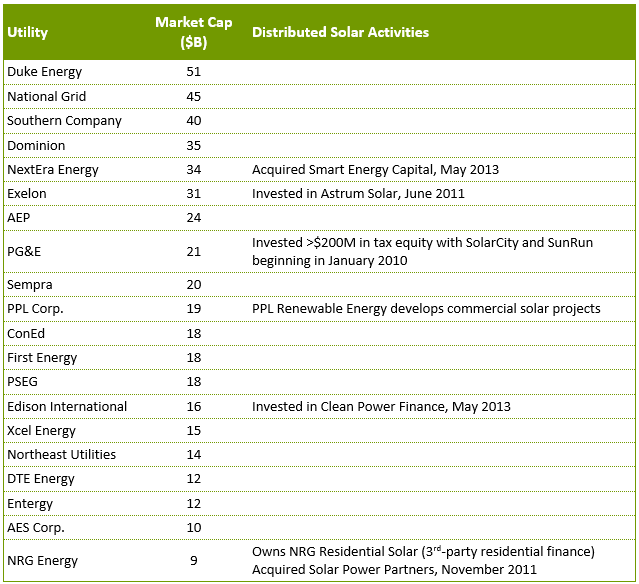 Why are they making these investments?

The chart below highlights what may be the most important difference between distributed solar and the conventional utility business: 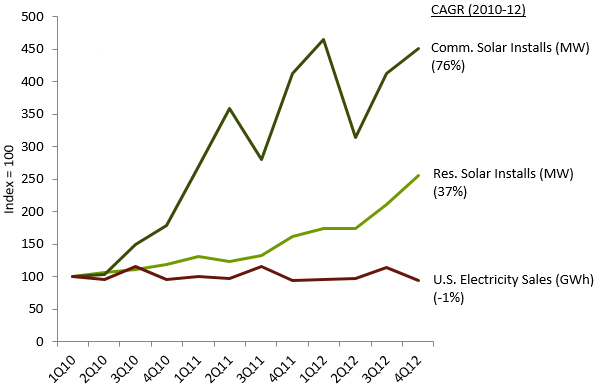 Roadblocks to Utilities and Distributed Solar

Figure 1, however, highlights that there are plenty of utilities still on the sidelines.  Some of the reasons are obvious, the others are more subtle:

First and most obvious, distributed solar could undermine the value of a utility’s existing, conventional assets.  One solution to this is for a utility to build or acquire distributed solar assets in geographies that do not overlap with its conventional assets.  For example, Southern Company could participate in distributed solar in PJM, California, Arizona, or Hawaii.  One could argue that if a utility’s territory is attractive for solar someone is going to build it and it might as well be the utility.  However, building or acquiring in a non-overlapping area may be an easier sell internally, to shareholders, and to regulators.

Second, the total installed base of distributed solar is still small compared to that of central generation and distribution.  For a power company with more than 20GW of generating capacity, even relatively large distributed solar owners such as SunRun, SunPower, and SolarCity are tiny, with significantly less than one GW of capacity.  For now, distributed solar isn’t “material.”  We’ve worked with companies that have decided they can just buy in to the market later.

Finally, the impact of distributed solar on GAAP earnings is problematic.  Take a look at SolarCity’s financials and you’ll see large operating losses at the country’s leading distributed solar company.  GAAP requires such companies deduct the entire cost of customer acquisition and G&A each quarter while spreading out lease and PPA revenue over 20 years.  As long as companies like this are growing they are going to show significant GAAP losses even if the economics of each project are attractive.  If you are a utility the market values primarily based on earnings, adding distributed solar to the mix therefore would require you to tell a significantly more nuanced valuation story to investors.