Blog » What Should Operators Do About the Apple Television?

As cable, satellite, and telco TV operators consider the impact of a potential Apple television, they should not be sanguine about the potential of such a device to dramatically change which operators gain and lose customers.

As we discussed previously, we think if Apple releases a TV it will do so in partnership with one or more traditional video operators, much like it released the iPhone in partnership with selected mobile operators.  Peter Misek at Jefferies believes prototype versions are already in the labs at AT&T and Verizon in the U.S. and Deutsche Telekom and France Telecom in Europe.  He also thinks Time Warner Cable may be working with Apple.

Impact of iPhone on Wireless Operators

The U.S. wireless market may be an instructive analog for what could happen in pay TV.  As the head of smartphone software portfolio strategy for Motorola’s handset division in 2008 and 2009, I got to see firsthand how Apple changed that market.

The first iPhone was offered exclusively through AT&T, starting in June 2007 (marked “1” in the graphic below).  In the competition between the big four U.S. wireless carriers up until this point, AT&T had been averaging about 25% of net customer additions across the big four carriers, about equal to T-Mobile.  Starting with the introduction of the iPhone, AT&T gradually increased its share of customer additions.  By the end of 2009 AT&T and Verizon were capturing essentially all the net additions of postpaid wireless subscribers, while T-Mobile and Sprint were losing such customers. 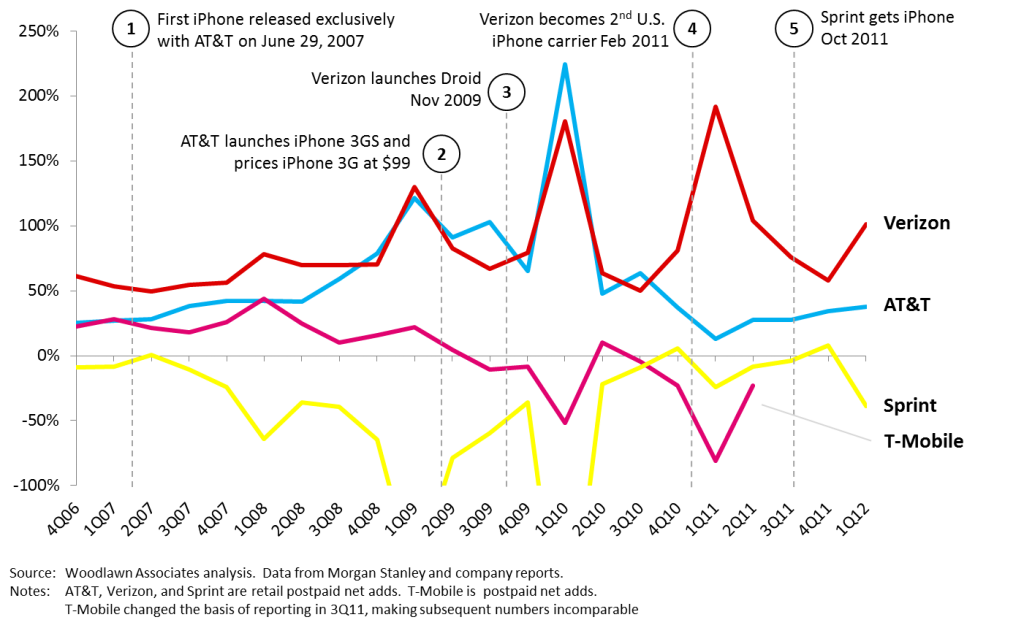 Essentially, the networks that thrived during the period either had the iPhone (AT&T) or a reputation for quality (Verizon).

In November of 2009, Verizon launched what many considered to be the first credible alternative to the iPhone, the Droid (marked as “3”), and it increased its share of new customers adds further.  AT&T also did well, probably because they had just released the iPhone 3GS and dropped the price of the iPhone 3G to $99 (marked as “2”).  The subscriber losses and T-Mobile and Sprint worsened.

Finally, when Verizon became the second U.S. operator to offer the iPhone in February 2011 (marked “4”), its share of net additions spiked and AT&T’s fell.  Four years after first getting the iPhone, AT&T is now back at about 25% of net customer additions.

Consumers generally have three to five video service provider options (DirecTV, Dish, a cable company, a telco, and possibly a cable/fiber overbuilder), but we think its it is likely that in most markets only one of these would be able to offer an Apple television.

If this is true, what would happen to the net video customer additions of cable, satellite, and telco TV operators who have—and who do not have—an Apple television? 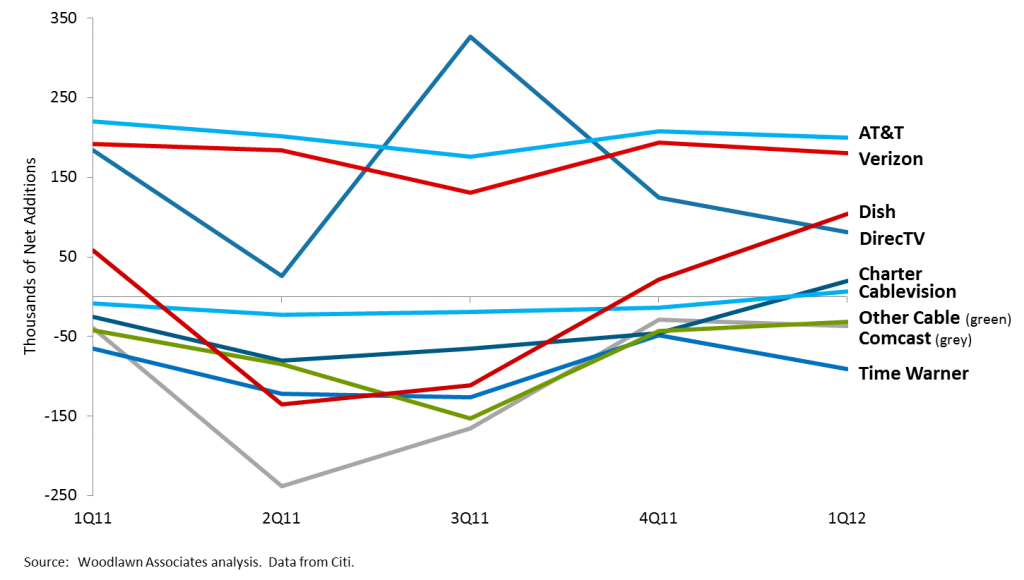 Would this also affect operators’ shares of broadband net ads, as consumers often buy video and broadband (and telephone) together?  What would be the resulting impact on operators’ profitability and growth?  On their market value?  If it isn’t obvious by now, we think video service providers ought to be carefully preparing for the potential launch of an Apple TV.

We think there are several potentially logical paths operators could take in view of the threat / opportunity from an Apple television.  The specific circumstances faced by every operator are different, so more work would be requirde to determine how appropriate they are for each operator.  However, these could be starting point for thinking about the possibilities:

One way pay TV networks are different than mobile networks is that a significant part of the value to consumers is in the content on the video platform.  Until now, however, operators have required content to run through their own set-top boxes.  This has enabled consistency and ensured the security of content, but has also saddled operators with the expense of set-top boxes and made upgrading the user experience difficult, costly, and slow.  To be fair, they have started to change this reliance on the set-top box with their TV Everywhere initiatives, but these are still entirely operator-controlled experiences.

As an alternative, what if operators opened the APIs to their video content platforms?  Third parties could then create devices or applications that tapped into this API to access video content.  What if Roku, TiVo, Microsoft, Sony, LG, Samsung, and the multitude of innovative companies that write apps for tablets and smartphones were able to create video user experiences based on that API?

An operator who made this move would not only significantly increase the pace of user experience experimentation and improvements, but would also significantly reduce the capex burden of CPE—many customers would procure their own.

Granted, there would be significant complexities in such an approach.  For one, this approach would only work for relatively large operators, as smaller operators just don’t have the scale to be interesting to hardware and app developers. Second, operators would have to find ways to make sure content stays secure and manage other non-trivial technology changes.  Third, they would have to spend resources on managing the API.  Fourth, they would have to give up on the idea that they alone are responsible for the consumer experience. (Those with experience in the mobile industry will recall, however, that large mobile operators previously specified the menu structure and features available on feature phones.)  Finally, they would also have to deal with customer support when there are a multiplicity of end-user devices.  Here again there is a lot to learn from mobile operators.

2.  strongly embrace a competitive alternative (A.K.A., “Find a Droid”)

For smaller operators or those looking for a more controlled process, another option would be to strongly embrace an existing competitive alternative.  For example, in the past two years several smaller operators have decided to make TiVo their platform of choice.  At The Cable Show in Boston a few weeks ago, it seemed there were dozens of companies with solutions for multi-screen, advanced user interfaces.

Of course, if operators have the technical ability to roll out their own competitive user interface, they can do so.  Comcast’s X1 looks to be very compelling.  We know from talking with other operators, however, that many of them do not have anywhere near the same resources focused on this type of innovation as Comcast.

This may be the time to decide it is better the exit the market than try to compete as a sub-scale player.  The best option for some carriers may be to take their shareholders’ money off the table.

On the other hand, some operators may be in a position to acquire technology companies that could significantly improve their UI capabilities and simultaneously prevent that expertise from being used by competitors.

Among mobile operators, emphasizing network quality appears to have been the strategy that worked best against the iPhone.  We aren’t sure exactly the same strategy will work in television, however, given that all pay TV operators are able to reliably deliver HD video.

The right play might be to emphasize the speed of the operator’s broadband network. For example, if an Apple TV was released with AT&T, competing cable operators may wish to make 50 or 75 or 100Mbps broadband standard with a video connection.  Of course, operators need to understand how much it will cost them to implement such changes and whether consumers perceive 50Mbps to be much better than, for example, 15Mpbs.

An operator could also offer more channels. For example, they might price HBO or other premium channels into the basic channel lineup.  It might also consider encoding channels in a higher-quality way.  However, both of these approaches have significant costs to the operator and it is not clear they are defensible.

Operators could also consider using contracts to prevent customers from defecting while they ready a more permanent response.  Of course, they could modify pricing.  They could increase the use of bundling (perhaps adding home security, wireless, or other services into the mix).  Again, the particular mix of options that that would make sense depends on the particular circumstances.

Finally, we shouldn’t discount the option of working with Apple, but this strategy is predicated on the assumptions that (a) Apple wants to work with more operators, and (b) the terms Apple will agree to are acceptable.  Given the way the iPhone changed the dynamics in the mobile industry, we think it is likely Apple will try to capture a lot of the financial benefits of a shift in the video industry.  Still, the mobile industry has shown that the costs of being left out of the party can be also be significant.

If an Apple television is as differentiated as the iPhone, it has the real prospect of significantly changing the competitive dynamic among pay TV operators.  Operators who wish to prepare have several choices, but they all require significant research and preparation to put into place.  Given that the iPhone is still impacting the mobile market dynamics five years after its first release, we suggest video operators have not a day to delay in determining which options are most likely to work in their circumstances.

Are there potential operator responses we’ve overlooked?  Do you agree or disagree with our analysis?  We’d love to hear from you—please leave a comment!