Our primer on tax equity investments (Tax Equity 101: Structures) explains that renewable energy project developers often use structures such as the partnership flip, sale-leaseback, and inverted lease to monetize the federal tax benefits for such assets.

Here, we dive deeper into the actual mechanics of and accounting for partnership flips. As we will see, the structure has several built-in inefficiencies relative to a single owner that can monetize all of the tax benefits internally. This is not an indication the structure is undesirable, but an acknowledgement of the imperfections in what is often the best available alternative for an owner without its own tax liability.

Figure 1 shows the basic legal structure for a partnership flip. A developer (Sponsor) and a tax equity investor (Tax Equity) form an equity partnership to own solar or wind assets (ProjectCo). We will refer to solar assets in the rest of this post for simplicity, but many of the same principles apply to wind. 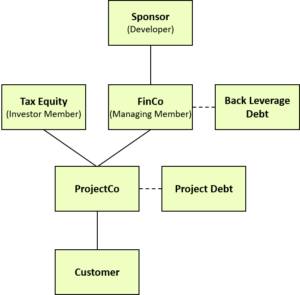 Tax equity typically provides approximately 40% of the fair market value (FMV) of the system or systems held by ProjectCo. While the precise amount varies, it typically ends up being about this amount to most efficiently monetize the available tax benefits.

Debt is also sometimes, but rarely, used at the ProjectCo level. More often, sponsors who want to use leverage do so within an intermediate holding company (FinCo).

Separate allocations of income and cash

Partnership flips work because U.S. partnerships can allocate income and cash separately and because allocations can change over time:

“A partner’s distributive share of income, gain, loss, deduction or credit shall, except as otherwise provided in this chapter, be determined by the partnership agreement.”
— IRC §704(a)

Figure 2 shows typical shares of income and cash items for the tax equity investor in a typical partnership flip:

Note how the tax equity investor gets 99% of the income (loss) in the first period (it will be a loss due to accelerated depreciation), but only 20% of the cash. Note also how the income share decreases to 67% in Period 2, which is typical and optimizes the tax efficiency of the structure. Finally, notice how its allocations decrease to only 5% after the “flip.”

The flip occurs when certain specific requirements are met. Generally, the tax investor’s allocations will flip down to 5-10% of both income and cash either on a specific date (in the case of a fixed flip) or when it achieves a specified return (in the case of a yield-based flip).

In a fixed flip, the flip occurs on a specific date the parties agree to when they form the partnership. Both the flip date and partnership allocations are designed to allow tax equity to achieve a target after-tax yield on the flip date, assuming the system behaves as expected. The flip date is usually 5-9 years after the system is placed in service.

In a yield-based flip, the flip occurs only when the tax equity investor achieves a predetermined target IRR. If the system performs more poorly than expected, tax equity will remain at pre-flip allocations for longer than expected, until it reaches its target yield. Yield-based flips have the added complication of the parties agreeing to the economic model that determines the returns, which is not required in a fixed flip.

In Figure 3, a screenshot from Woodlawn’s partnership flip model, the tax investor achieves its target IRR (8%) during the period ending March 31, 2024.

All flips give the sponsor a call option that allows it to buy out tax equity after the flip. In Figure 3, the sponsor exercises this option at the end of the second quarter after the flip. Even though the buyout is optional, the market expects sponsors will exercise it. Sponsors are in the business of long-term asset ownership. In addition, they would typically prefer not to deal with the control and reporting requirements that come with having a partner.

The buyout price is usually the greater of the value of future cash flows and the amount to achieve an all-in target IRR.

Some (fixed) flips may have a put option that requires FinCo to buy out their share of the partnership.

Accurate accounting for partnerships requires that partners keep track of their capital accounts and outside bases. A partner’s capital account represents its relative financial ownership of ProjectCo. A partner’s outside basis represents its tax basis. For example, if a partner had an outside basis of $350 and sold its share of a partnership for $500, it would pay capital gains tax on only $150.

Capital accounts and outside basis increase and decrease over the life of the partnership as follows:

Figure 4 illustrates the changes in capital accounts and outside basis for a typical project. 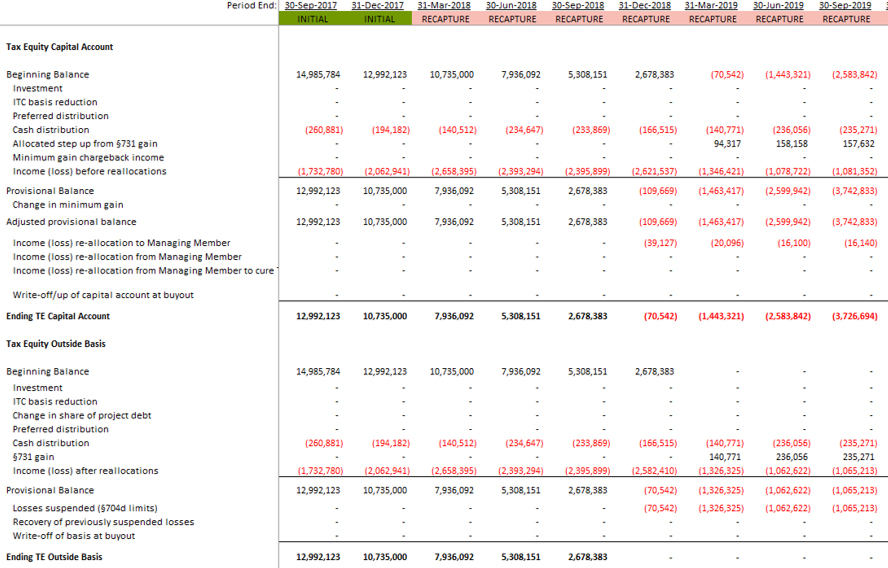 Adjustments due to tax credits

Taking a step away from partnerships, IRC §50(c) says that an asset owner must reduce the depreciable basis of any asset that uses an energy credit (such as the ITC) by ½ the amount of the credit.

The accelerated depreciation available for solar will cause losses for the first few years of system operation even though the project generates positive cash flow. These losses, plus distributions of cash, eventually drive tax equity’s capital account negative. In Figure 4, this happens in the period ending December 31, 2018.

We mentioned earlier that U.S. partnerships can allocate income and cash items separately. However, for the IRS to respect the allocation ratios, the partners must agree to something called a deficit restoration obligation (DRO). A DRO requires any partner with a negative capital account to restore it to zero (via a capital contribution) if the partnership is liquidated. While the capital contribution is only made if the partnership liquidates, tax equity investors generally do not want any DRO to exceed 25-50% of their initial investment. Therefore, tax equity will often require the partnership to reallocate losses to the sponsor once its capital account drops below a certain level. In Figure 4, see Income (loss) re-allocation to Managing Member.

Notice, however, that the reallocations in Figure 4 are much smaller than would be required to prevent tax equity from having a negative capital account (and DRO). This is due to the so-called the 66 2/3% rule. Per Treasury Regulation §1.47-6, during the ITC recapture period (the first five years of operation), a partner cannot receive less than 2/3 of its original income allocations. Because of these reallocation limits, tax equity may end up with an unavoidable DRO. The reallocations merely limit its size.

Reallocations are inefficient. Sponsors seek tax equity because they do not have tax liability themselves. Having losses reallocated to the sponsor, therefore, is not ideal.

Outside basis, suspension of losses, and §731 gains

The partners’ outside bases increase and decrease in much the same way as their capital accounts. Unlike capital accounts, however, outside bases cannot go below zero. Losses that would drive a partner’s outside basis negative are suspended. Therefore, even if the tax equity investor does not care about the size of its DRO and does not require the partnership to reallocate any losses to the sponsor, its losses often end up being suspended at some point due to this limit.

These suspended losses are carried forward and can be used to offset future income when the partner’s outside basis is positive. This is nonetheless inefficient because of the time value of money.

Looking again at the period ending December 31, 2018 in Figure 4, we see that the provisional balance of the outside basis is negative. However, the $70,542 in losses that would drive it negative are suspended, leaving a final balance of zero.

“Gain shall not be recognized to such partner, except to the extent that any money distributed exceeds the adjusted basis of such partner’s interest in the partnership immediately before the distribution.”
— IRC §731

The partners are naturally taxed on this income; this is another often-unavoidable inefficiency.

When we discussed the structure of a partnership flip, we briefly mentioned that tax equity often wants to avoid project-level debt. In theory, project-level debt could be quite attractive. Each partner can add its share of any project debt to its outside basis, limiting suspended losses and §731 gains. Project debt also creates something called minimum gains when the book value of project assets decreases below the outstanding principal on the debt; the partners add these gains to their capital accounts and therefore limit the need to reallocate losses.

In practice, however, tax equity is typically unsupportive of using debt in the project company. Like any equity investor, it needs to consider the effect of having debt payments be senior to equity distributions. More important, however, is that any foreclosure by debt would be a change in ownership requiring ITC recapture. This would be catastrophic to tax equity’s returns.

When tax equity allows project-level debt, it typically puts a 300-500 basis point premium on the flip yield and requires debt to agree not to foreclose on the asset, even if it would otherwise be entitled to, until after the recapture period. This is usually difficult for debt to accept, and it is therefore much more common to see debt used as back leverage.

Investors typically use a method called Hypothetical Liquidation at Book Value (HLBV) to determine book (GAAP) income allocations for partnership flips. The traditional equity method of accounting is not appropriate when shares of ownership, income, and cash are different and vary over time, as they do in partnership flips. 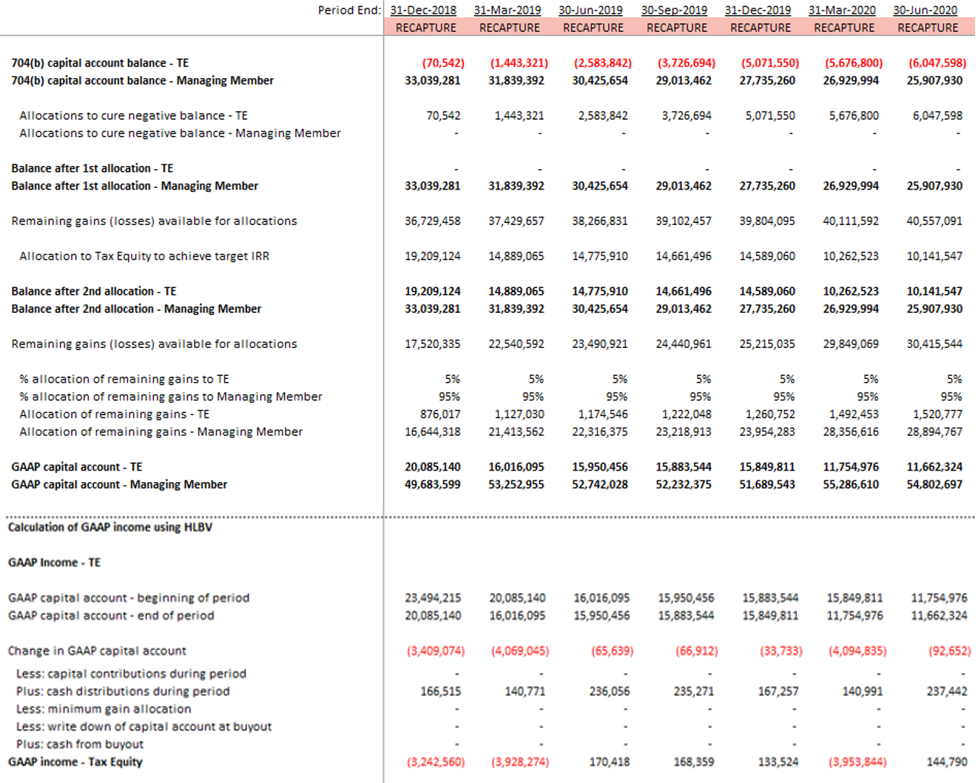 However amazingly (deviously?) clever HLBV is from an accounting perspective, it can often lead to results that are somewhat counterintuitive due to the shift allocations and differences in depreciation timing between tax and GAAP accounting.