SolarCity, the largest residential and commercial solar installer in North America, has filed a public registration statement for its IPO (see it here).  Here are a few observations we pulled from the document.

SolarCity reported overall gross margins of 21% for 2011 and 30% in the first half of 2012.  However the really dramatic revelation in the S-1 is the difference in gross margins between systems they sold for cash and those they financed: 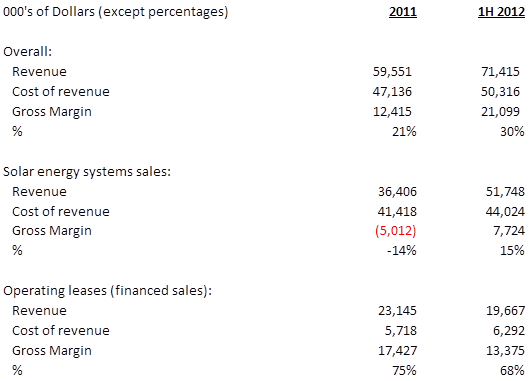 This list seems consistent with a company telling a compelling a growth story for an IPO.

As we have said before, we expect financing is more difficult to pull off than installation, so economic rents should flow to those that have financing.

At first glance SolarCity’s 68% gross margins on financed systems may seem impressively high.  However, this is largely the effect of the accounting treatment.  SolarCity spreads out both the revenues and costs of such sales over time. Revenues are spread out over the term of the financing (usually 10-20 years) and system costs are spread out over 30 years.

However, SolarCity and other companies that finance solar systems require a large up-front dose of cash to pay for the equipment and its installation.  Then they receive payments over the period of the lease or PPA.  Based on our work in solar financing, we’d say margins like SolarCity’s 68% are consistent with unlevered IRR’s in the high single to low double digits.

SolarCity Needs to be Analyzed as Project Development Company

SolarCity reported operating expenses totaling 72% of revenue in the first half of 2012:

For most businesses this would be an unmitigated disaster, but not in this case because the vast majority of SolarCity’s new contracts are for financed systems on which revenue is recognized over a period of 10 to 20 years, while the entire costs of generating those contracts are captured in operating expenses today.

If we consider SolarCity’s SG&A expense as part of project expense, we can start to see the true shape of the business.  Over the period 2009-1H2012, SolarCity averaged $0.48 in SG&A for each Watt booked.  Loading such expenses into the IRR calculation we did above would reduce IRR by about two percentage points, which is still potentially consistent with good returns.

It would, however, be helpful to have more detail on the specific arrangements SolarCity has with its project funding partners to understand how the returns from those projects will be split between the parties.