This is the second in a series of posts on grid energy storage. In Energy Storage 101, we discussed how various customer types can benefit from storage.In this post, we discuss key storage technologies and identify the economic value chain for battery storage. Next week, we will examine, in detail, the economics of commercial behind-the-meter storage in Energy Storage 201.

A variety of energy storage technologies have been/may be used for each the applications we described in Energy Storage 101. However, there are some technologies that are simply better for some applications than others. Here we will briefly examine the some of the more popular technologies:

In pumped hydro systems a pump-turbine sends water from a lower basin to an upper basin to “charge” the system. Later, water is released from the upper basin back to the lower basin, spinning the turbine in reverse.

Pumped hydro has historically been considered the only true utility-scale storage option. Because plants can provide hundreds of MW of rated power and hours of discharge time, they are particularly well suited for long-duration applications like time-shift and supply capacity. In fact, in the U.S. just under 40 pumped hydro plants provide more than 99% of the operational energy storage capacity.

While their immense capacity makes pumped hydro plants seem an ideal solution for utility storage, there are very few new pumped hydro plants being built. This is because they take a long time to permit and construct due to environmental concerns, which also makes financing difficult. Of course, their scale and specific locational requirements make pumped hydro plants unsuitable for non-utility-scale applications.

Lithium ion batteries are one of the most recognizable type of energy storage due to their prevalence in consumer electronics and cars such as the Tesla Model S. One reason they are popular is they last longer and are less affected by cycling than some other types of batteries. Designers can also adjust their power and capacity in a seemingly infinite number of ways by using different types of electrode materials. They also operate at room temperature. Finally, the cost of lithium ion batteries has dropped significantly over the past ten years.

Though these batteries are versatile, they are not perfect. They are more costly than pumped hydro, for example, and do not last as long as some other batteries.

Lithium ion batteries seem best suited for small- to medium-scale applications where safety, fast response time, and reasonable insensitivity to cycling are the goals, such as in residential, commercial, and short-duration utility-scale applications.

Sodium sulfur (NaS) batteries, as the name suggests, employ sodium and sulfur electrodes to store and generate energy. They have high capacity and long cycle lifetimes, and can be used with either short or long discharge times. These characteristics make them perfect for applications like frequency response, renewables time shift, and capacity firming.

However, NaS batteries require high temperature to operate efficiently. The high temperature and volatility of the chemicals used in this type of battery lead to safety concerns that prevent their use for behind-the-meter storage applications.

Flow batteries operate by flowing liquids past one another. The liquids react and transfer electrons to the circuit via oxidation and reduction reactions. These batteries are extremely efficient, but require liquid pumps and a larger number of moving parts than other batteries.

Flow batteries, unlike any of the others, however, can discharge to 100% DOD and still provide a cycle life of 10,000 cycles. The liquids used in these batteries never degrade, thus flow battery life is only limited by maintenance and replacement of the pumps and the ability to limit leakage. The pumps used to move the liquids in a flow battery system and the storage tank size required are both large, however, so flow batteries tend to have a large footprint. Given these characteristics, they make the most sense for small utility-scale and commercial applications.

Other types of storage include flywheels, compressed air energy storage (CAES), gravity powered storage, and many other types of batteries. Like the technologies discussed above, each of these has advantages and disadvantages for certain applications.

As the result of their different characteristics, each storage technology is best suited for particular applications: 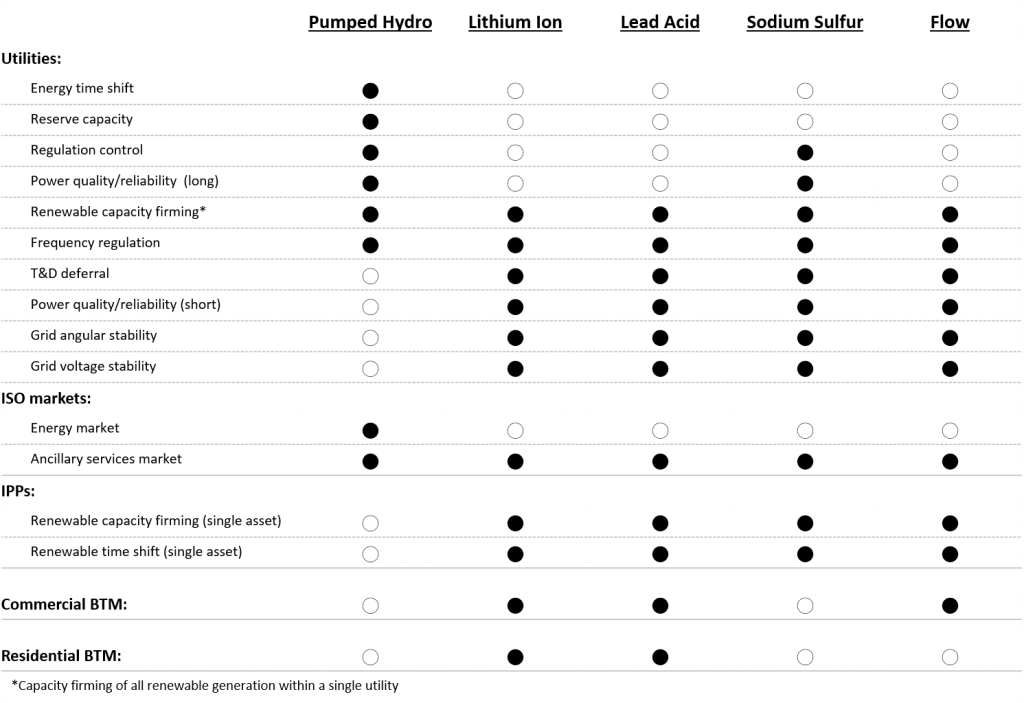 Since there can be wide variations in the details of particular applications we list above, use this as a starting point for what to consider.

The value chain for energy storage, especially for batteries, is not yet as clear as in many other industries. Actually, the steps in the chain are quite clear (see Figure 2, below), but participants are still jockeying with different points of view of which steps, if any, are best integrated in one entity. 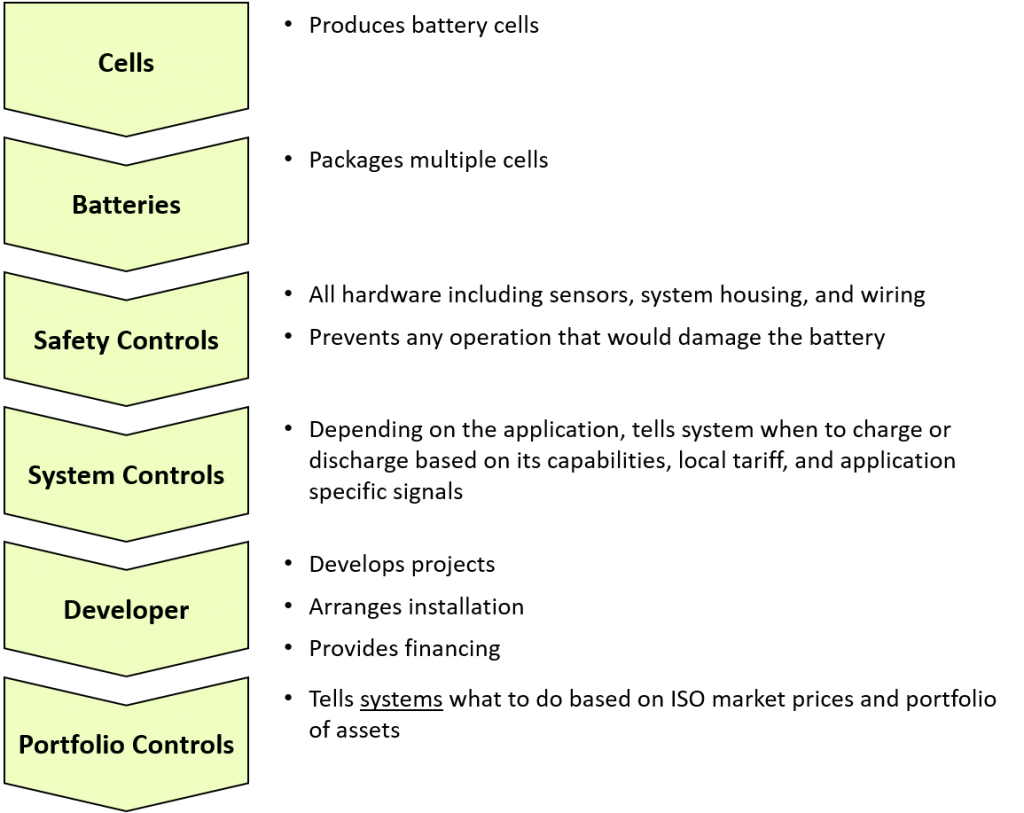 Many of the companies associated with providing batteries for stationary energy storage are involved in more than one part of this value chain. A (non-exhaustive) list of companies involved in the various steps can be seen in the table (Figure 3) below. 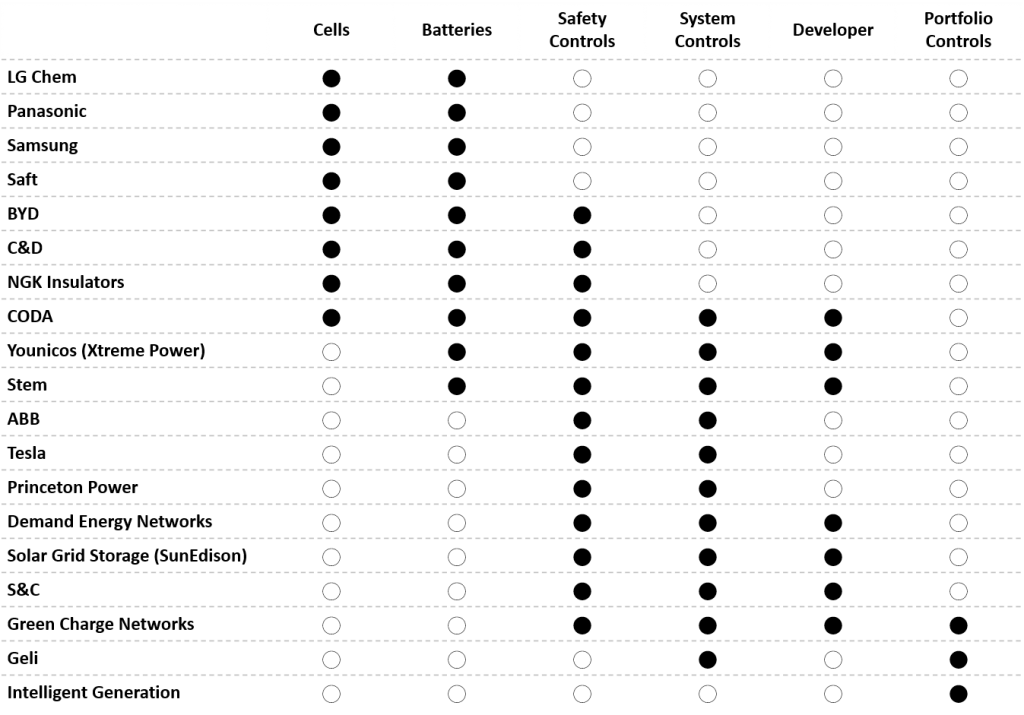 In the next post, we will provide a detailed look at the economics of commercial energy storage.