Historically, energy storage has been mostly deployed by utilities. Utilities have about 10-11 unique applications for energy storage, which can be broken into two categories: long- and short-duration:

Long-duration applications require 90% DOD or more over the course of several hours. Some applications, such as spinning reserve, may only draw on the battery a few hundred times, while others, such as time-shift or T&D deferral, may require thousands of cycles.

For short-duration applications the technologies need only need to discharge for a few minutes, but need to respond quickly. Usually, discharges are very shallow. For applications like frequency response, the battery may be called on hundreds of times per day.

Sometimes storage systems address several of the above applications. A system may have a primary application, but also secondary and tertiary applications. Southern California Edison operates a battery in Irvine to provide frequency response, voltage stability, energy time-shift (specifically for renewables), and reliability. Duke Energy, on the other hand operates a pumped hydro plant in South Carolina that is used solely for energy time-shift.

Businesses are constantly looking for ways to reduce costs, including those related to energy. Utilities typically charge businesses for both the energy they consume (kWh) and their peak demand (kW). Commercial storage installations are primarily used to manage demand—also known as peak-shaving.

Stored energy is released to keep the demand on the utility at or below a set point. The storage system recharges either when demand falls below that set point or during off-peak hours, when energy is less expensive. Tesla offers batteries for peak shaving meant to limit a customer’s peak load by up to 50%.

Energy storage can also have secondary benefits. Depending on how the storage device is designed and where it is located, a business could enter it into an ISO’s market for frequency response or other ancillary services. Companies like Green Charge Networks claim to be able to monetize demand response programs payments as well.

Energy storage can also be used for backup, and it may have some benefits when combined with rooftop solar. We discuss these applications under residential energy storage, below.

First, it may be used to reduce a customer’s electric bill. Since residential customers are rarely on electric tariffs with demand changes, however, residential storage is typically designed to shift grid energy consumption from on-peak to off-peak hours instead of limiting peak demand. This time shift allows customers to benefit from time-of-use pricing. This is the intended application of Tesla’s 7 kWh Powerwall battery system. Some critics suggest that the deep, daily cycling that is required for this application shortens battery life to the point of making this application uneconomic. Of course, the reality depends on the installed cost of the battery and battery technology.

Second, storage may be used for backup power. Tesla’s 10 kWh Powerwall system is designed for this application. Historically, backup generators have provide this capability for far less cost than batteries—especially for higher-power applications—but this may be changing as the cost of batteries falls. Such batteries—perhaps aggregated to form a larger apparent system—could also potentially be bid into ancillary services or demand response markets.

Finally, storage may make solar installations viable where they would not otherwise be economic or allowed by the utility.   For example, in areas without net metering, a storage system could be used to capture energy produced in excess of current consumption for later release. Storage might also be combined with solar in areas where utilities are concerned about the timing of solar energy production, such as Hawaii and California.

ISOs are not the owners of storage, but rather control the usage of assets owned by others and deployed their territory. ISO market participants can either deploy storage solely to participate those markets or they can bid assets that have other purposes (such as commercial peak shaving) into the markets when doing so does not conflict with their “primary” applications.

As with utility applications, response time, discharge time, depth of discharge, and cycle life are the important factors each of the services provided to the ISOs. Because of their ability to both provide and absorb power in seconds, energy storage has become very valuable to the ISOs. This flexibility has led to almost 100% utilization of energy storage for ancillary services by PJM, as compared to less than 5% usage of combustion peaking plants for the same purposes (see Figure 2). 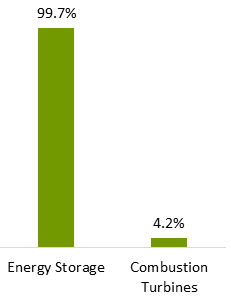 IPPs may participate in any of the above markets. For example, an IPP might own an energy storage system used by a utility, a commercial customer, or a residential user under some type of financing arrangement. Or, it might own energy storage that it bids into ISO markets, as AES has done with a 32 MW battery in PJM territory for frequency response.

IPPs may also use storage themselves to increase the value of an intermittent renewable generation asset via capacity firming or energy time-shift, as Invenergy does at its Grand Ridge Wind Farm. The electricity produced by a solar or wind farm that can guarantee a specific capacity at certain times of the day may be more valuable than the electricity from one that does not. However, time-shift requires batteries that are capable of daily cycling with deep discharges.