END_OF_DOCUMENT_TOKEN_TO_BE_REPLACED

We have, at the end of past years, summarized what we found to be the best business books of the year (see our list for 2012—we didn’t get to it for 2013). This year, one book stood significantly above the rest:  How We Learn: The Surprising Truth about When, Where, and Why it Happens, by Benedict Carey.  Josh initially read it for personal reasons—it was recommended by two of his kids’ middle-school teachers.

How We Learn summarizes modern research on effective learning. It repudiates some folk wisdom (for example: always study in the same, quiet place) and provides other very useful insights and techniques. We heartily recommend it whether want to help your children in school or apply the techniques at work.

Here are our key takeaways:

END_OF_DOCUMENT_TOKEN_TO_BE_REPLACED

We are regularly asked to comment on customer acquisition cost (“CAC”) in the solar industry because we’ve calculated it for so many firms.

In 2012 we published a report on CAC called Solar Marketing Effectiveness.  We concluded the average CAC was $5373 / customer, or $0.89 per Watt.  We have since helped several firms with CAC on a proprietary basis and the numbers we’ve seen in those projects aren’t too different.

It’s not uncommon for us to get objections that go something like this: “SolarCity says their customer acquisition cost is only $2500.” or “Other sources say it is only $0.50 or $0.60 / Watt.  Why are your numbers different?”

In both cases it comes down to how expansive the definition of CAC is.  Our approach is not unlike that of a sculptor.  We start with a solid block of material—all costs, as captured in a company’s books—and we cut away everything that is not CAC.  Thus, we are unlikely to overlook certain acquisition costs just because we forgot or did not know to ask for them.

How straightforward this is depends on the financial detail we have.  If we have access to a company’s general ledger, we can review each transaction to determine if it is related to customer acquisition.  It can be more difficult if we only have access to the P&L.  Some lines on the P&L may contain certain expenses that are CAC and others that are not.  For example, a company might have one line for “marketing & advertising” and another for “salaries & wages”, but that doesn’t give us enough information because we should realize that some—but not all—of the salaries and wages line is for the marketing and sales teams.

Nonetheless, it is often possible to make an CAC estimate from financial statements and other reasonable assumptions.  For example, we estimate that SolarCity’s residential customer acquisition cost in for the quarter ended March 31, 2014 is about $1 / Watt installed or $0.70 / Watt booked.

END_OF_DOCUMENT_TOKEN_TO_BE_REPLACED

In a previous post, I said Woodlawn Associates believes solar project sponsors (i.e., equity investors other than tax equity) expect to earn an 8-11% after-tax internal rate of return on their investments.  As I said in that post:

So how does one determine cost of capital for a project sponsor?  First, we have to understand what we mean by “sponsor”.  I use the term to mean the company that invests regular equity in project companies, which is usually a holding company subsidiary of a parent solar financing company: 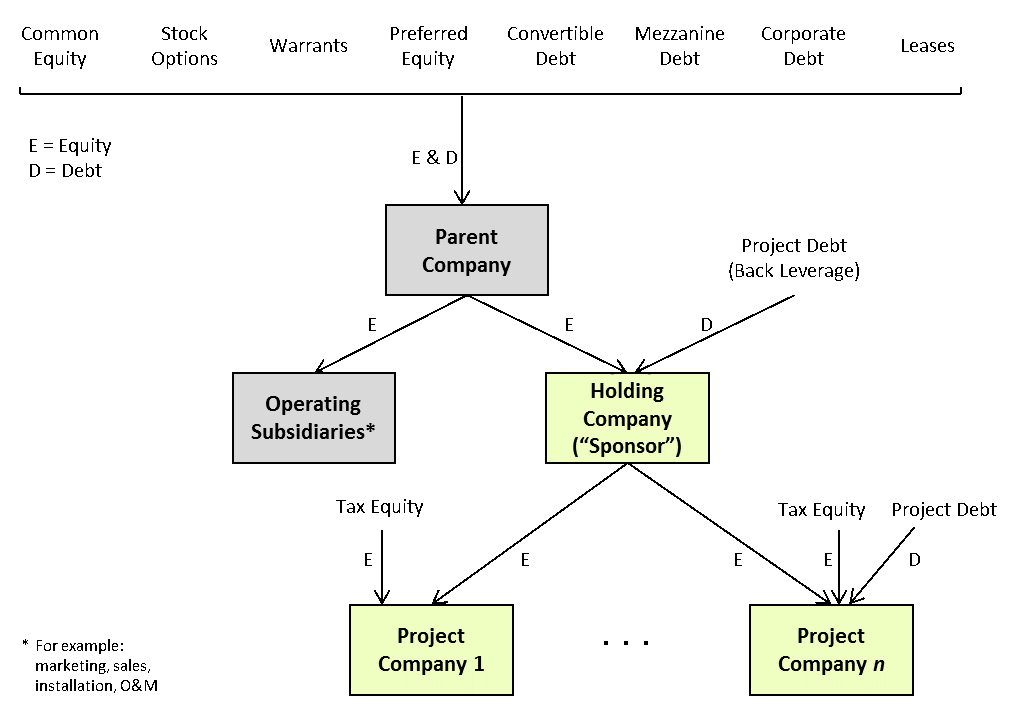 In this post I will first examine the cost of capital for project companies and then for sponsors/holding companies (the green boxes in Figure 1).